This year has not been anything like anyone expected it to be, that’s for certain. Little did we know this was the year we would spend several months at home, social distancing and trying not to get sick. At the very beginning of this year, when we thought 2020 was going to be a completely normal, run-of-the-mill year, we got some fantastic news. On January 2nd, 2020, after peeing on several of those cheap pregnancy sticks you can get on Amazon and one “real” Clearblue stick, I found out I was pregnant! 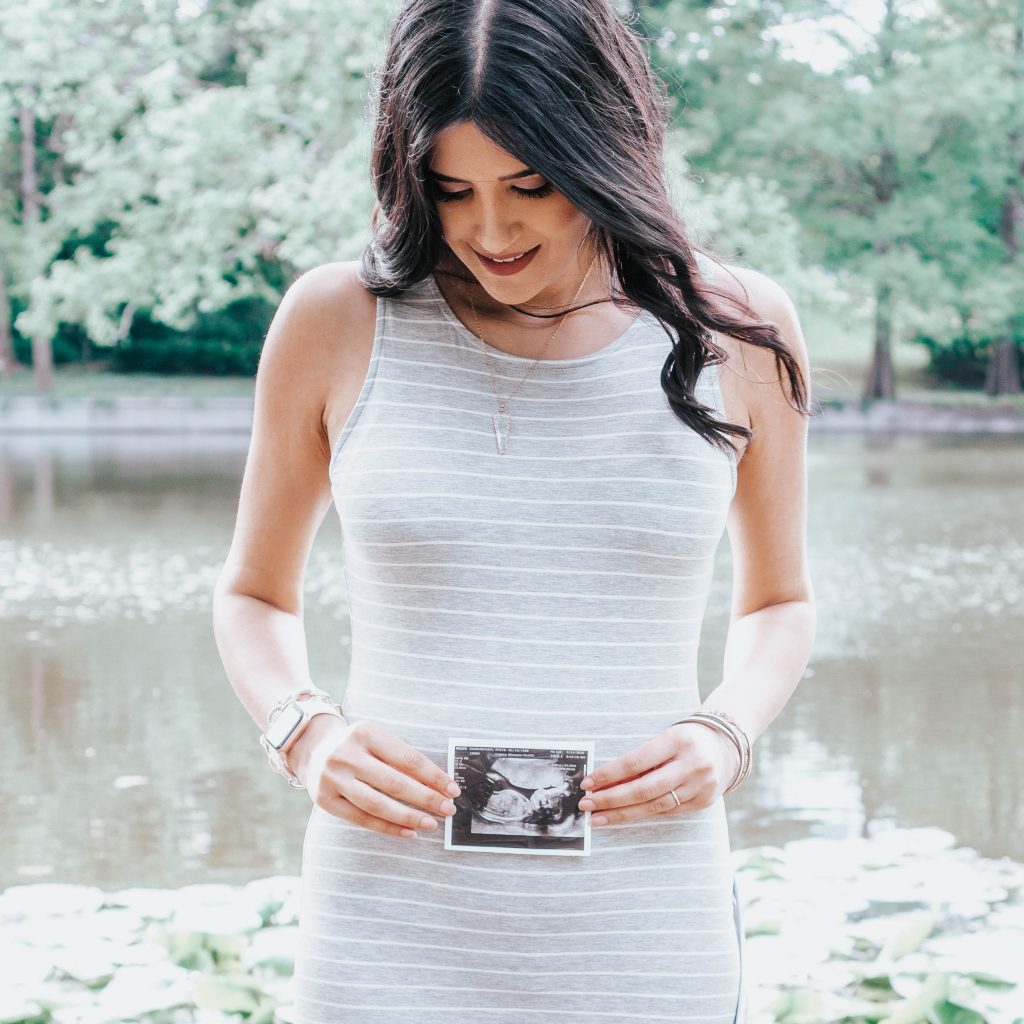 I am currently 22 weeks am expecting a baby girl in August! We’re pretty excited but also nervous about what’s the come. It took me a long time to get to this point where I’m not in denial about what’s happening… there’s a baby inside of me. If you’d like to read about our experience, please feel free to read this very long post. 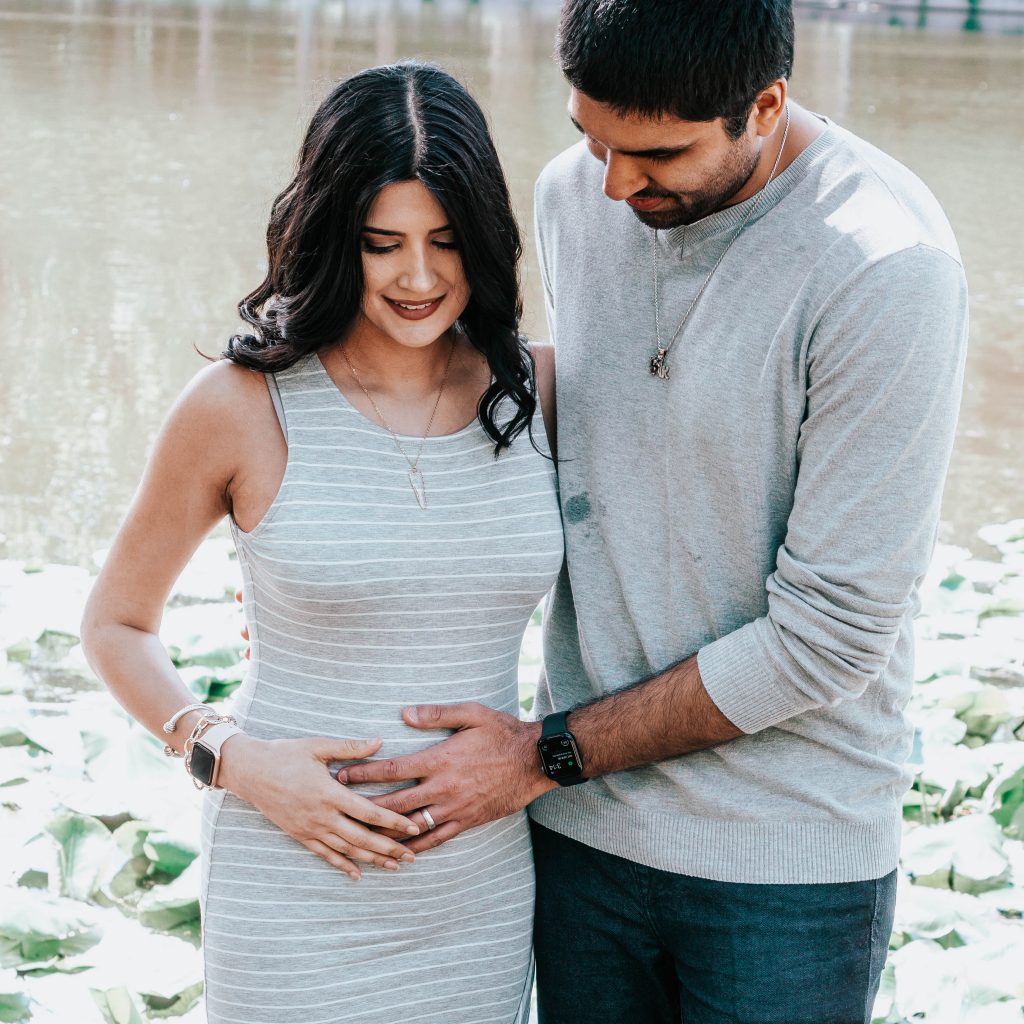 Before going any further, I want to say my heart goes out to those who are struggling to get pregnant and those who have suffered losses or are experiencing tough pregnancies. Trying to conceive and pregnancy is such a personal experience to every single person/couple and no one can truly understand what you are going through. The comparison game is a tough one and I personally have caught myself comparing my journey to others, but this is not great for my sanity. I do realize it’s easier said than done, but please realize each journey is different.

I feel like there are a few questions people tend to ask, so I am going to address them here:

Were you trying or was it a surprise?

After putting off even trying for many years due to my fear of being pregnant and delivering, last year I finally decided I was ready. I still put it off for several months, always using an excuse. For example, in January we went to Belize for an amazingly fun vacation with friends and in order to be safe in regards to the Zika virus, we weren’t supposed to try until 3-6 months after that.

How long did you try for?

We tried for 3 months, took a 1-month break, then tried again and get pregnant on the 4th try. It turns out my ovulation was completely off from the app I was using. Ladies, if you are trying to get pregnant make sure you are trying when you are actually ovulating. I ended up buying these ovulation strips from Amazon just to make sure I was ovulating when it said I was supposed to. I actually ended up using them only after I had technically already gotten pregnant, and only then did I realize our timing was pretty off. I am extremely grateful we were able to get pregnant relatively quickly. During the 3 months it didn’t happen, I did get discouraged, although I really tried my best not to let it get to me.

How did you find out?

New Year’s Eve of this year we threw a small get together at our house. At this point I was already 6 days late, but during those 3 months we tried unsuccessfully I was consistently 5-6 days late so I wasn’t sure if this was the real deal or not. I told Ap, maybe I shouldn’t drink tonight, what if I’m pregnant. His response is “well until you take a test, you’re not pregnant.”

I didn’t want to be disappointed again so I didn’t end up taking a pregnancy test that day, especially because it could be too early to tell that I was pregnant via a strip. I decided not to take the test and just pretend I wasn’t pregnant. I ended up drinking maybe half a cup of Mexican Mule, because in the case that I was pregnant, I didn’t want to have a binger. On New Year’s Day I was dead tired and slept for literally 5 hours during the day. Jan 2nd I woke up and was like okay, something is off, I still haven’t gotten my period, and it’s been 8 days. I took one of those cheap tests I ordered from Amazon and it showed pregnant immediately. I burst out of the bathroom, woke Ap up, and told him immediately.

His response? “What? Really? Take another one. Actually, take 5 more, and a real test.”

It was pretty obvious to me I was pregnant based on how I was feeling and how quickly the second line showed up, but to Ap it wasn’t. He wouldn’t believe it until I took a “real” Clearblue test and at least 4 more of those cheap tests. (I ended up taking 3 total tests, 2 cheap tests and 1 clear blue test).

How far along were you when you found out?

What were your first pregnancy symptoms/signs?

Prior to my pregnancy I was going to Orangetheory consistently in the morning at 3 times a week. A few days before I knew I was pregnant, I woke up with a massive headache. Since I was signed for a morning class I decided to go anyway (so I could avoid the late cancel fee). I thought I could stick it out and that my headache would subside but I stayed for maybe 10-15 minutes and had to leave because it was just so bad. I think I went another time and I just had extreme fatigue so I had to leave early again. I used to rarely leave class early so this was a big deal. Extreme fatigue was the number 1 first trimester symptom and was pretty consistent until well into even the 2nd semester.

What pregnancy symptoms do you have?

Fatigue, mentioned above, was a major one my first trimester, and a little bit into my second trimeseter.

Migraines. Another one that has been consistent… Unfortunately, I have been getting migraines since I was 12 years old, so it’s not anything new to me, but the frequency with which they come is what’s been different. The tiniest ounce of stress would trigger a migraine. At first my ob/gyn told me I can’t take anything besides Tylenol, but this wasn’t cutting it. I normally take Sumatriptan for my migraines and they work pretty well because they prevent me from having extreme nausea and helps my peripheral vision loss subside. After a few migraines without sumatriptan, I did some research and found there are no studies that relate it to birth defects and I brought it up with ob/gyn. She told me I can go ahead and take it if it’s on an as-needed basis, which it is.

Acid reflux has been an issue starting later in my first trimester and continuing into my second trimester. I never even knew how acid reflux and heartburn felt until I became pregnant. Supposedly there is a correlation between acid reflux and how hairy the baby is. If she’s anything like me, she’s going to come out like a little monkey.

I’ve been lucky that I’ve had no nausea! The only times I’ve had bad nausea are the times I get migraines.

Have you felt the baby move?

Yes! At first, I honestly couldn’t tell, but my mom kept asking me if I felt the baby yet. She said she was reading they could feel like gas bubbles. I joked that I always have gas bubbles. I then started to really try recognizing the difference between “gas bubbles” and twitches with no associated gas. I started being really able to recognize the difference on April 10th (looking back at messages) when I was 19th weeks.

How are you feeling? Are you guys excited?

Yes, I’m excited for sure but also extremely nervous. I have a lot of anxiety and I am not ashamed to admit it. I have a lot of fear about how the baby is doing and if she’s alive and well. I have been asking myself “is she still in there!?” multiple times throughout this pregnancy.

Additionally, I’ve always had a lot of anxiety about pregnancy, delivering, and being a mom, but especially about the delivering part. I still get triggered by birth stories so I definitely try to avoid them if I can.

I even got a migraine talking to my ob/gyn about delivering, and decided I should start seeing a therapist.  My therapist has been really helpful and I’ll continue to see her well after the baby is born. My ob/gyn said the likelihood of postpartum depression and anxiety is higher if you have anxiety now, so ladies, please do not be ashamed to seek help if this is you!

Ap is pretty excited too. He wanted to get started on the name picking, registry, and nursery immediately. I on the other hand was still completely in denial about the pregnancy and having a baby and wanted to put it off as long as possible. I am honestly very grateful he’s taking the reins on a lot of this because I know I would be the one scrambling at the last minute to get things done.

If you’ve made it this far, bravo to you! To be honest I wasn’t sure if I wanted to get so personal like this on my blog, but I’m making a leap of faith and putting it all out there. I’ll answer some more questions in another blog post regarding what it’s like to be pregnant during quarantine, workouts & issues during pregnancy. If that sounds interesting to you, be sure to check it out.

I hope to be more present with my blog and want to document my pregnancy in an honest and insightful way. In the future I’d love to look back at my blog posts and really appreciate this experience after the fact. Until next time!