Are you starting to get deep, stubborn, blackheads? Is your skin constantly red and irritated? Are you breaking out one blemish after the other with seemingly no way to control it? You could be over exfoliating and you may not have known it!

This post feels so silly for me to write since it seems so obvious to me now, but I genuinely believe I need to let everyone know because you could be doing this too! Using trendy products promising to clear pores, reduce acne, and help with blackheads is the norm nowadays, but I don’t believe we are properly warned about the potential effects of over exfoliating.

We’re about to get real up close and personal with my face so you’ll see all the flaws. If close ups of faces are not your thing, you may want to skip this.

I bought Drunk Elephant’s TLC Framboos in April 2018. I wouldn’t use it every day, just when I remembered to use it, maybe 4-5 times a week. I was also using the Foreo mini before I started using Framboos and continued to use it while adding the Framboos to my skincare regimen. Additionally, I was using Babyfacial maybe 1x every 2 weeks as well. That being said, that is already a LOT of exfoliation:

In January of this year I decided to use a bunch of different The Ordinary products to help my redness and acne. The products I started using were Niacinamide – 10% + Zinc 1%, Azelaic Acid, Ascorbyl Tetraisopalmitate Solution 20% in Vitamin F,  Alpha Arbutin 2% + HA, and Salicylic Acid 2%.  It looked like this before: 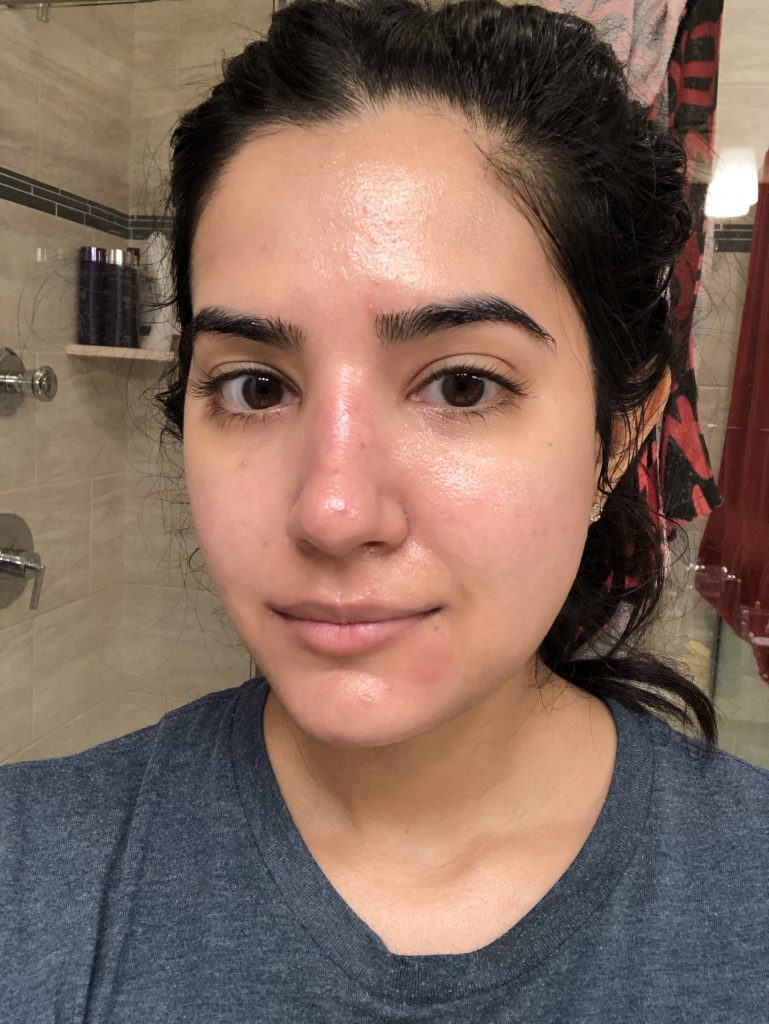 As you can see, I definitely have redness on my nose, a little bit on my checks, blemishes on my forehead and nose, as well as cystic acne starting to form near my chin. I thought my skin looked terrible! (Shaking my head). In all honesty, it really wasn’t that bad, but I definitely thought it was. It could have been because of the exfoliation I was already doing! I honestly didn’t know what I was doing in adding those particular The Ordinary products to my skincare routine. 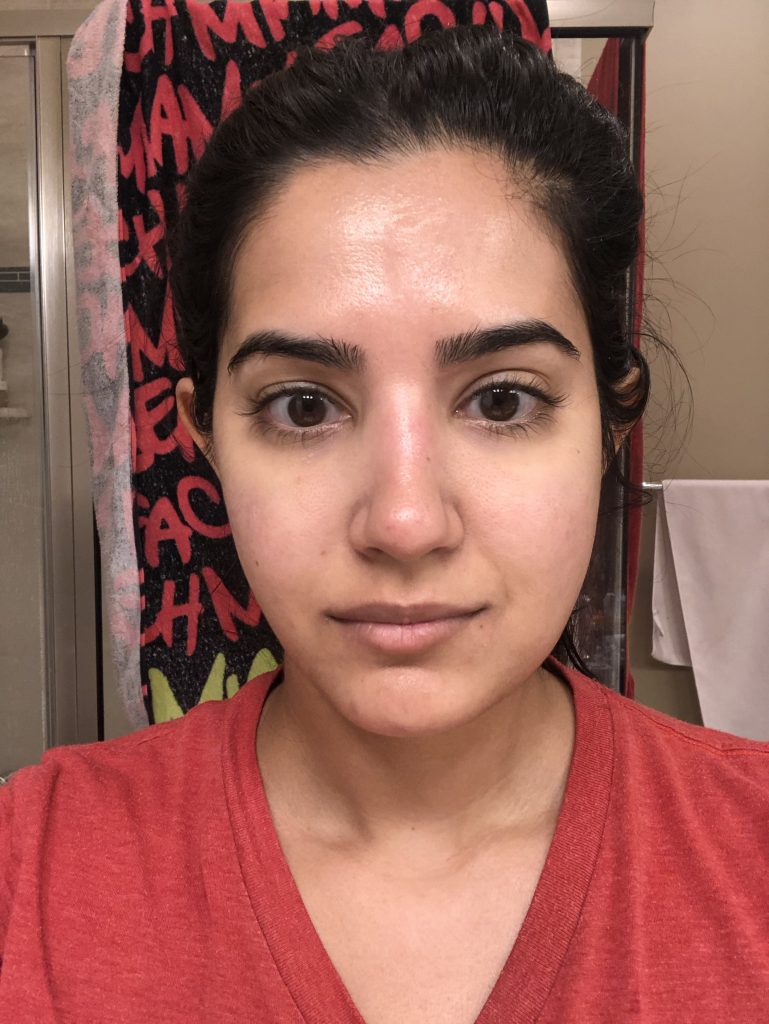 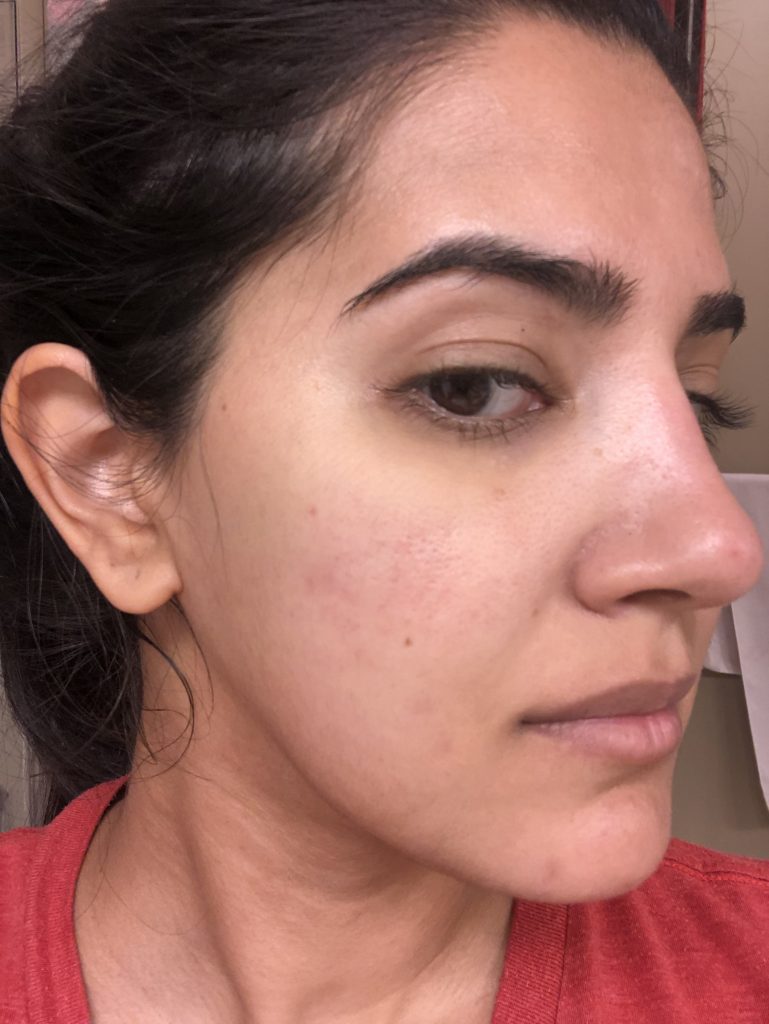 I still have that little red patch on the right side of my face but all in all it really wasn’t bad. 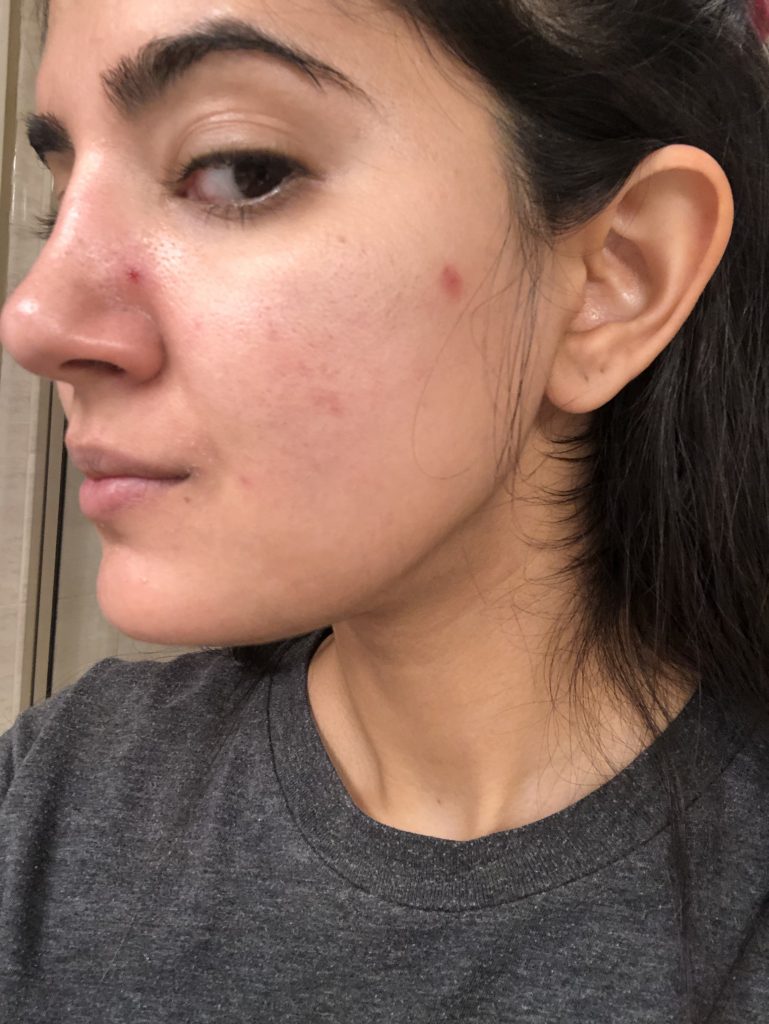 This is the beginning of where I think it started going downhill due to over exfoliation.

I started getting crazy deep acne which I had never had before, and I was continuing to use the same skincare routine I had been previously, with Drunk Elephant Framboos. This little dark bugger on my cheek was there for probably a month and a half before it fully went away. It never really surfaced as a white head but it was just stuck underneath the skin for a month. I should have done a warm compress to get it out faster, per my dermatologist; something to note in the future. You can see my cheek is irritated and red. 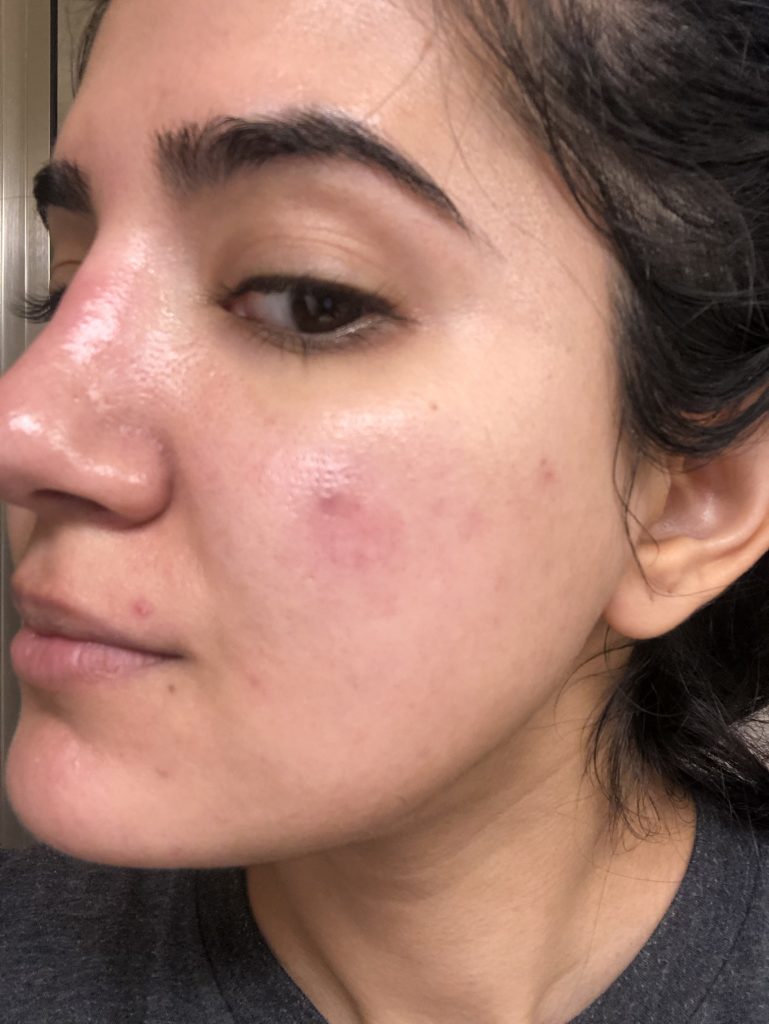 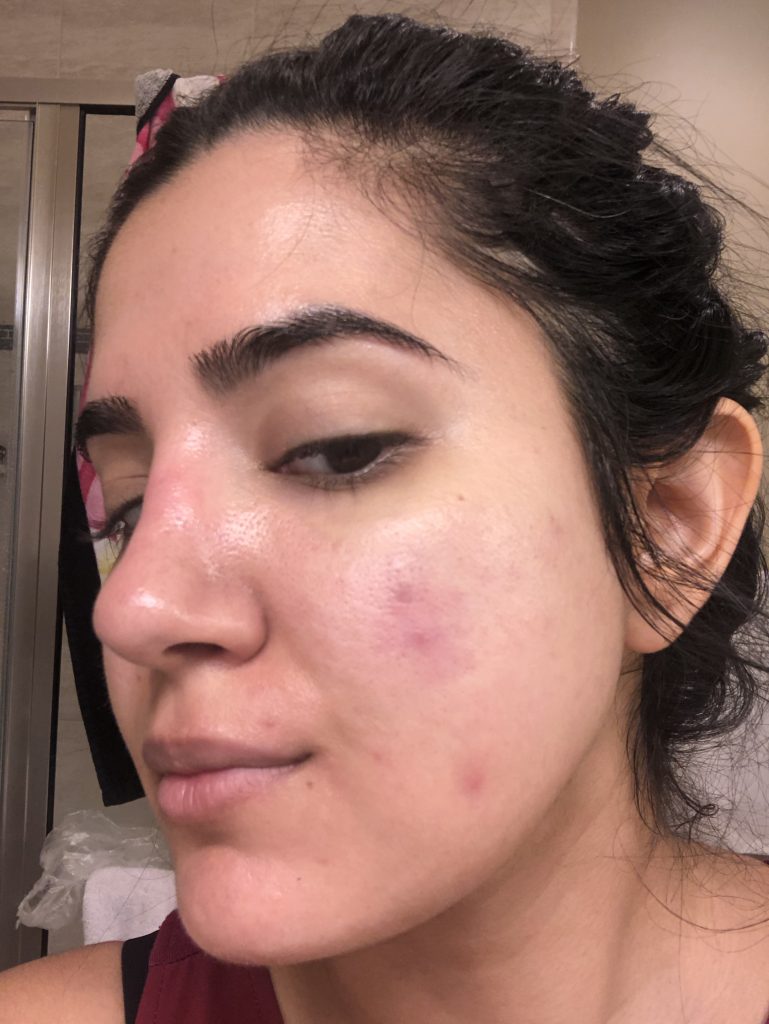 I then started noticing I would get blackheads on my nose and even my cheek which I NEVER had before! When people talk about having blackheads I didn’t truly know what that meant until I started getting them regularly. I started noticing actual holes in my skin, not just large pores. It was bizarre. Ap would tell me “maybe you should stop using all these products” and my response would be like “no, I have to use these!” 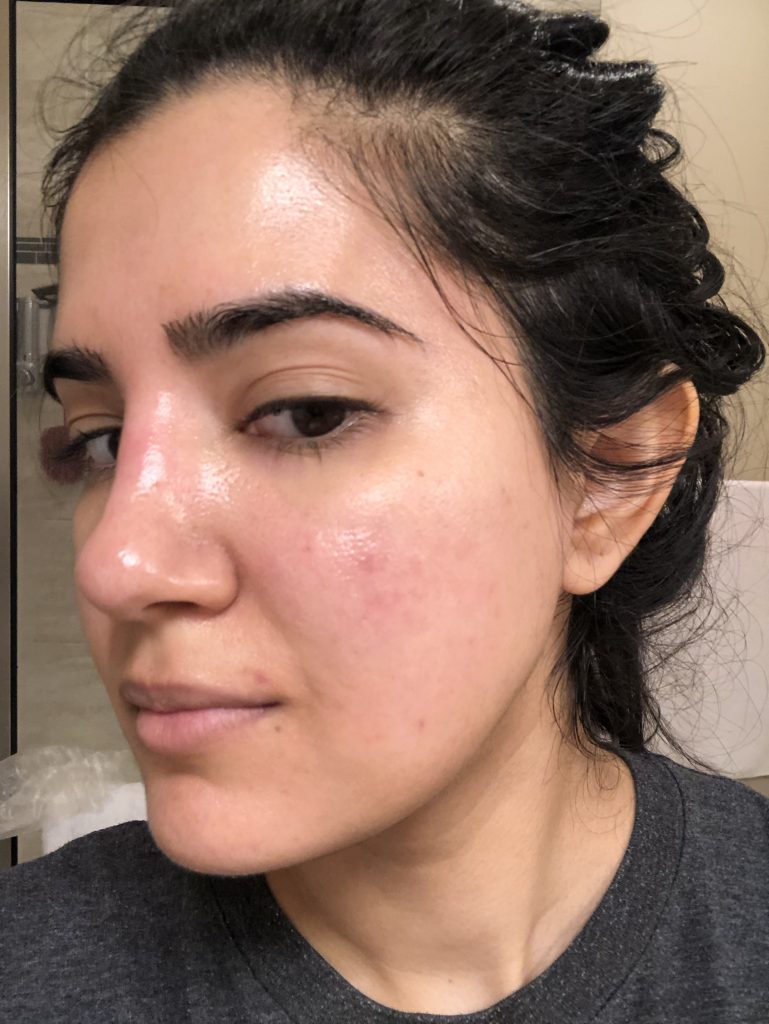 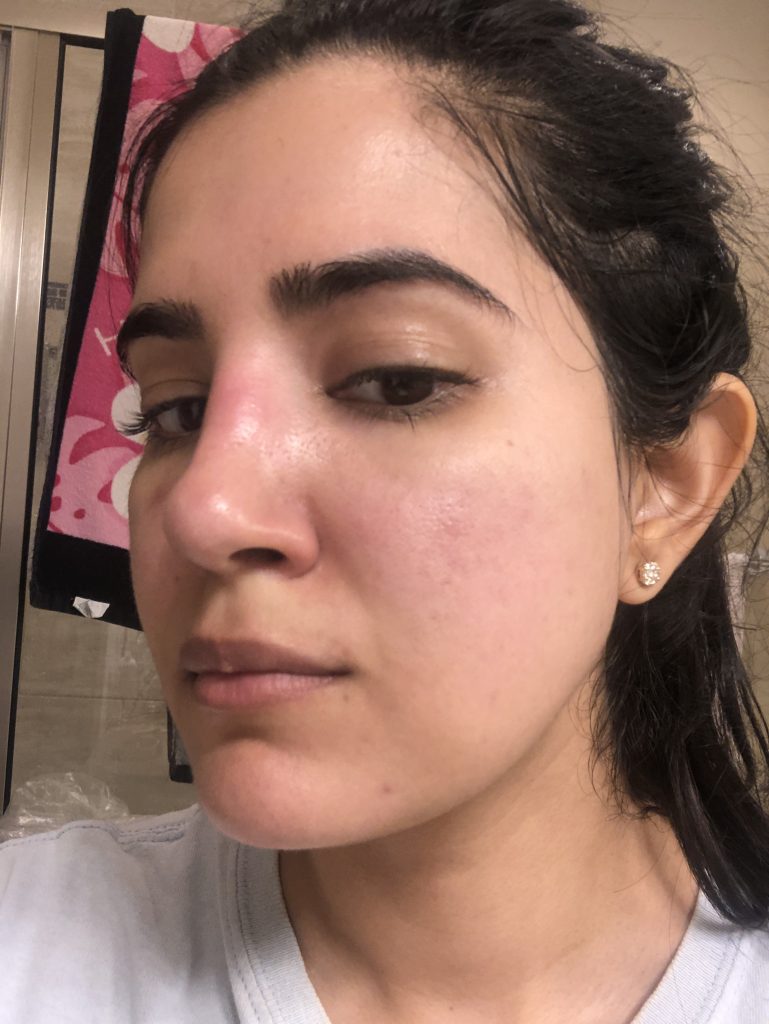 By June it had gotten significantly better but I had another deep acne blemish on the right side of my cheek (you can kind of tell in the above picture, it’s closer to my eye on the other side of my face). But regardless, Paula’s Choice CLEAR acne system seemed to be working!

In Thailand I started breaking out like crazy on the right side of my cheek, and since I was out in the sun all day and I had applied Retin A on it, the spots became pretty dark. I was still using Framboos and the Foreo Mini at this point, along with Paula’s Choice CLEAR system which includes an exfoliant, Salicylic Acid 2%. 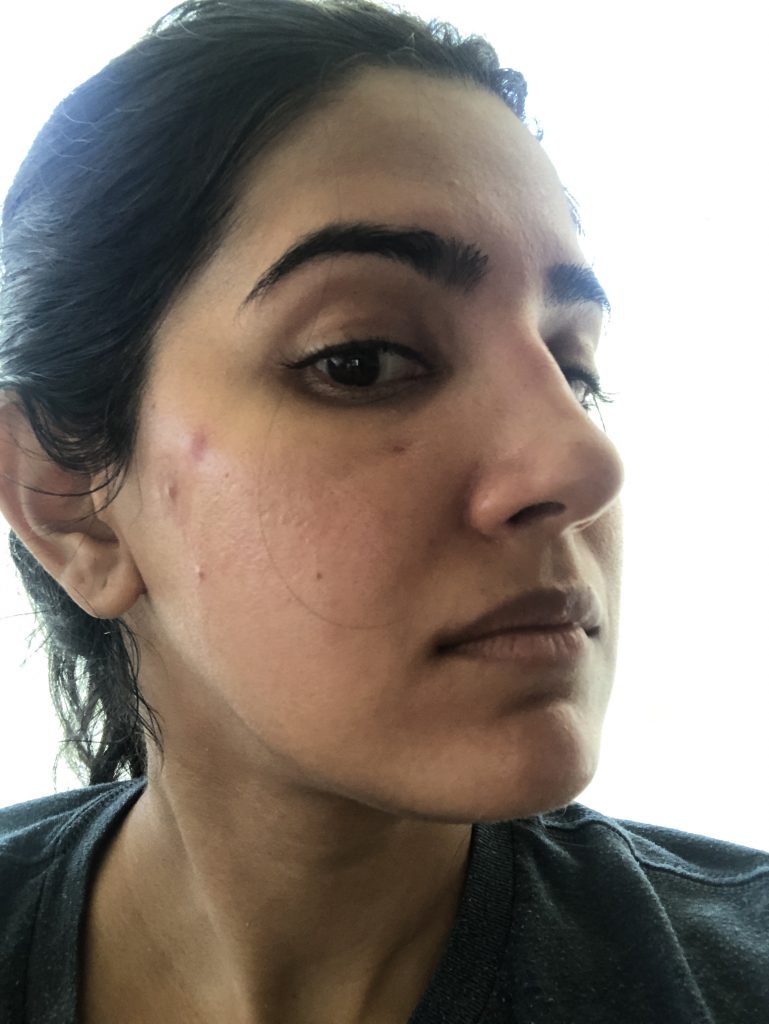 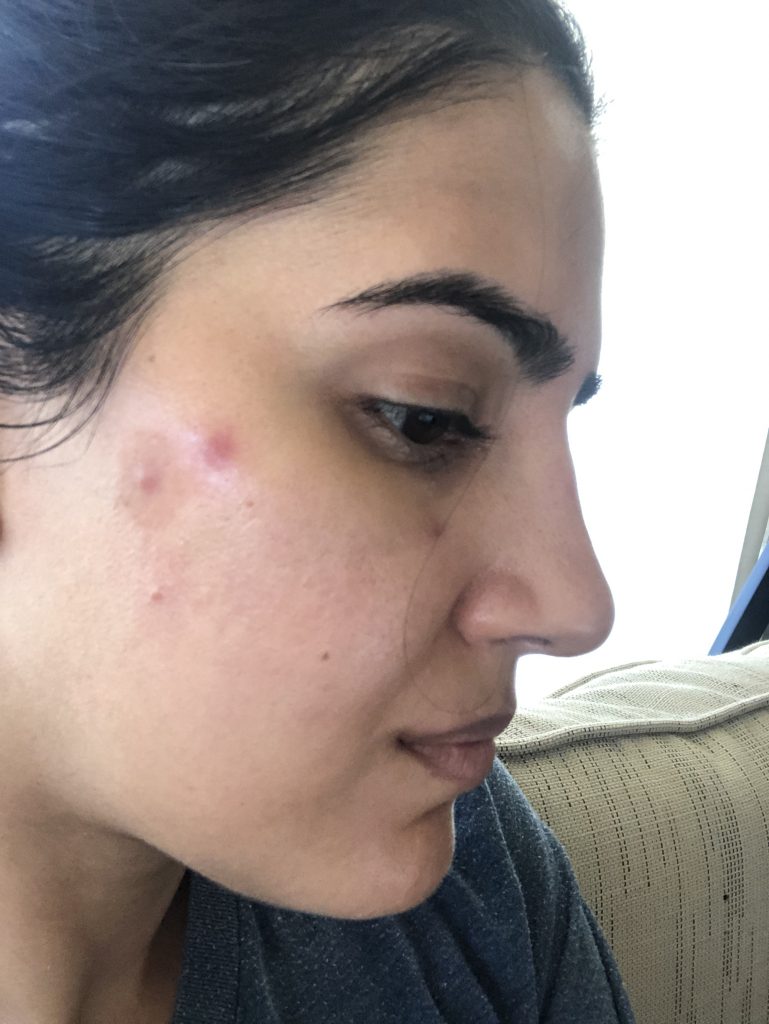 Ok I don’t have a great picture of my face on August 6th, but you can assume it was red and angry like the pictures above. I finally decided to get a facial. I had bought a Groupon for a microdermabrasion from an independent facialist near my work that had great reviews. Shout out to Maria at eliteprowellness.com!

I told her what I was using and that I have had issues with blackheads and clogged pores. She said I was overexfoliating and there is no reason for me to be using Framboos every day. To be honest, I didn’t really believe her as much as I should have. Little did I realize that the Framboos + the Paula’s Choice salicylic acid + Foreo Mini were all exfoliators and I was using them way too much.

This picture was taken a week after my facial. She said I don’t need to use the Framboos for the next 7 days because I had just gotten a microdermabrasion. I honestly didn’t want to heed her advice because I thought Framboos was supposed to help with acne, but I begrudgingly listened to her and didn’t use it, and then I started to notice my skin was getting less angry.

I googled over exfoliation, found so many articles about it, and had had the most eye-opening experience with what I was reading. Mostly I was thinking “are you effing kidding me?!” 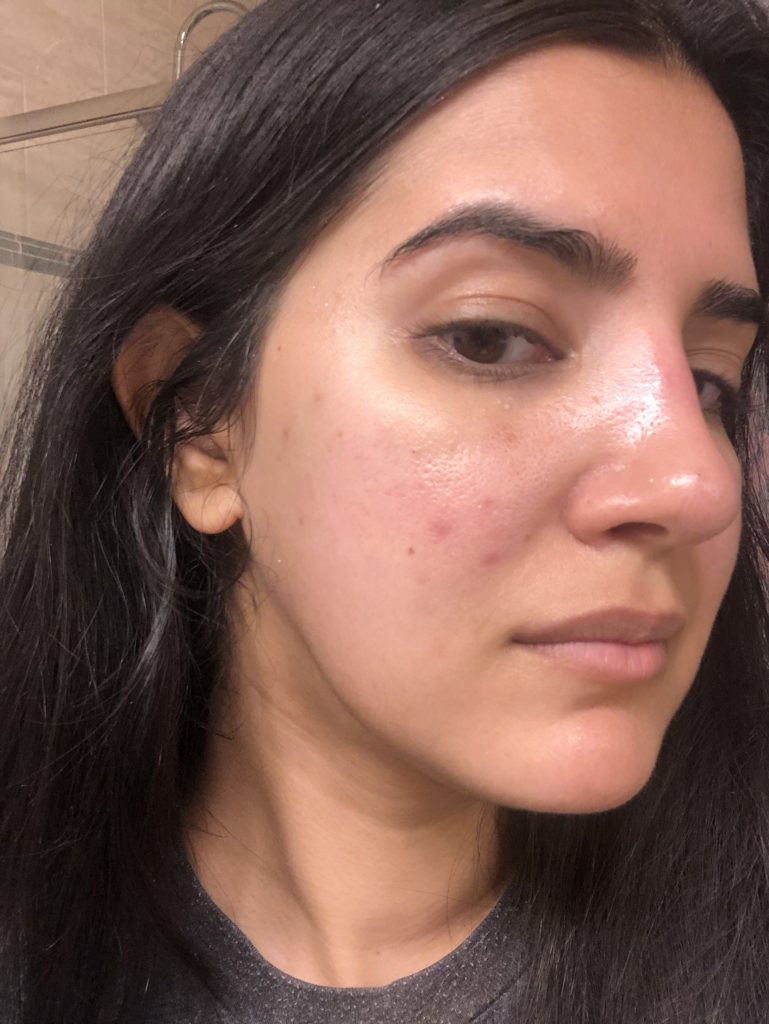 I decided to stop the Framboos until my skin had calmed down a bit, and stopped using the Foreo Mini as well. My skin was starting to normalize, I could tell.

My aesthetician told me I just need to use the AHA/BHA exfoliator (Framboos) maybe 1 to 2 times a week, there’s no need to use it every day, but I just wanted it to get back to normal so I stopped using it completely for a little bit. 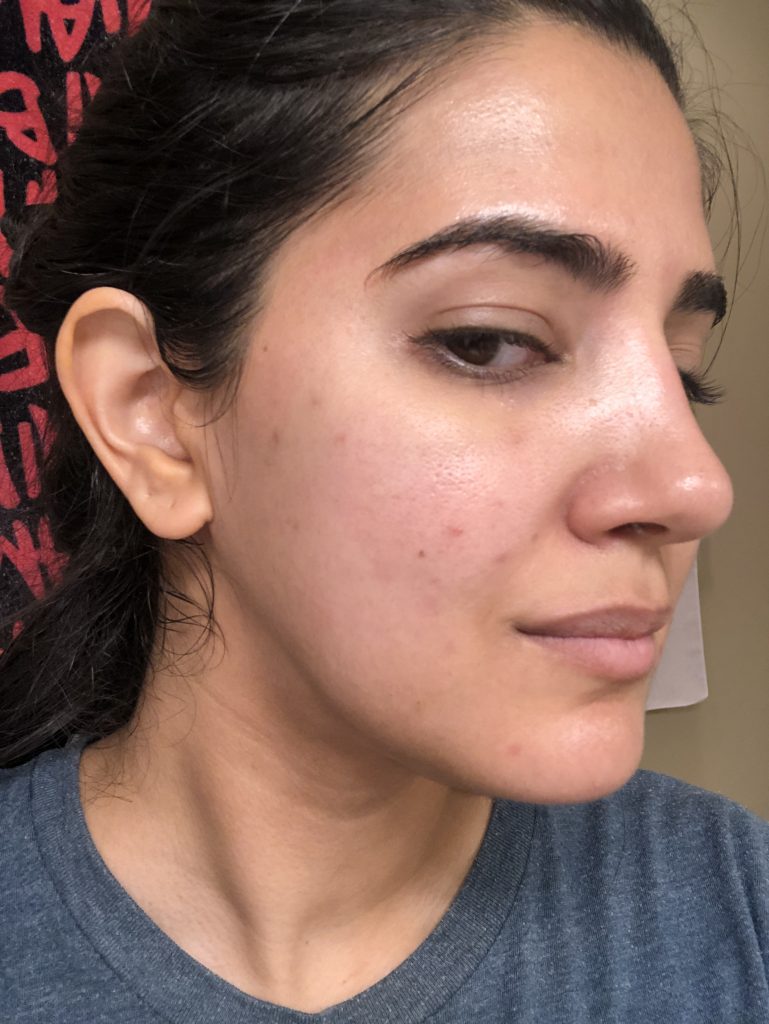 You can see leftover pigmentation from the blemishes I had, but overall my skin had definitely improved in a month. 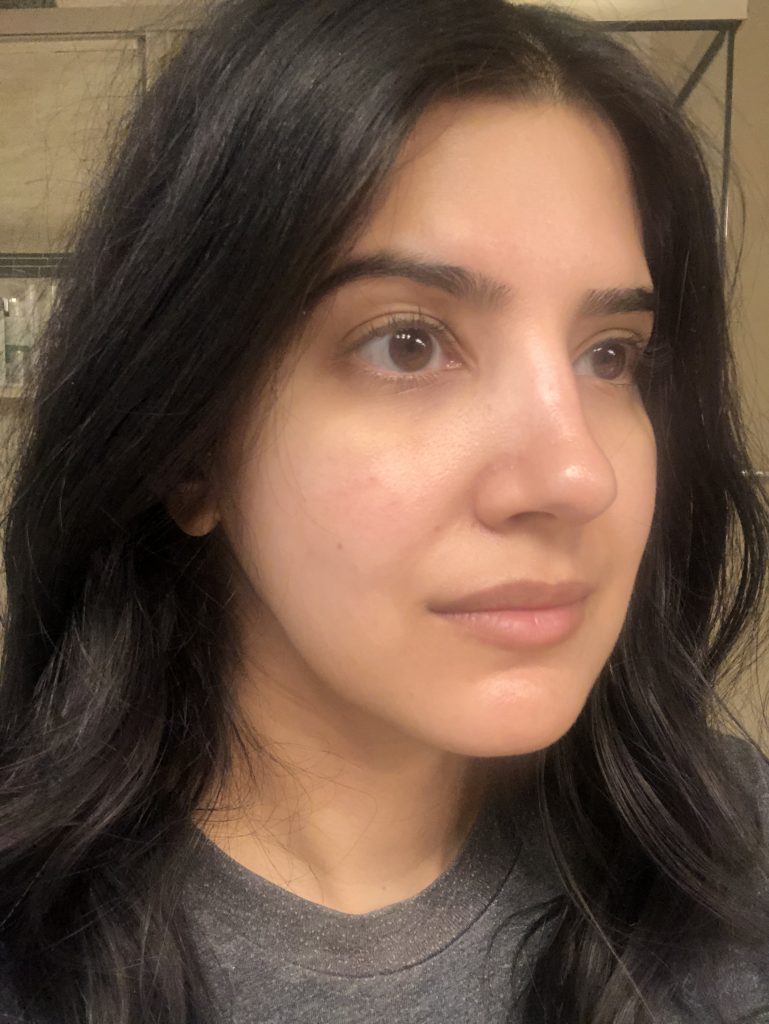 After I got over the initial fear of using Framboos after this whole ordeal, I used it sparingly, maybe once or twice every 2 weeks in the months following. However, since I found out I was pregnant in January, I’ve stopped using it completely.

Currently I am only using Azelaic Acid because it’s apparently the only pregnancy safe medication. I’ve been told to stay away from high percentages of certain acids including glycolic and salicylic acid, however I know lactic acid is safe for pregnancy and I have ordered a bottle from the Sephora VIB sale! I’m also thinking it might be beneficial to use the Foreo a few times a week but haven’t implemented that yet.

Unfortunately, I am getting hormonal breakouts during pregnancy. I’ve noticed when I start eating a lot of gluten and white flour I will get flare ups so I’m avoiding a lot of gluten. This quarantine has got a certain someone in my household making pizza dough from scratch and we were eating pasta regularly, so I’m just trying to limit my intake.

Learn from my mistake and do not over exfoliate!

Mother’s Day is exactly one week away and I’ve put together some last minute gift ideas! Please note that this post contains affiliate links. 1. Aura Digital Photo Frame  If there’s one thing moms in general love, it’s pictures. I... END_OF_DOCUMENT_TOKEN_TO_BE_REPLACED 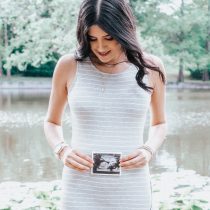 This year has not been anything like anyone expected it to be, that’s for certain. Little did we know this was the year we would spend several months at home, social distancing and trying not to get sick. At the... END_OF_DOCUMENT_TOKEN_TO_BE_REPLACED 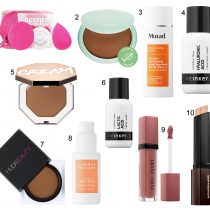 1. Beautyblender – Besties Makeup Sponge and Cleanser Set I’ve literally never bought an official Beautyblender until now, and I’m kinda excited about it. I have sponges from Real Techniques at Ulta, but I’d love to see how the... END_OF_DOCUMENT_TOKEN_TO_BE_REPLACED
One of the hardest parts about starting something is actually staying committed. This is true for many things in life; school, work, health, relationships, etc. In my particular case I know I have a problem when it comes to committing... END_OF_DOCUMENT_TOKEN_TO_BE_REPLACED
« Older posts